Do you know what a wine meme is? The internet sure loves its memes. The term “meme” was originally coined by scientist Richard Dawkins to describe an idea or concept that spreads from person to person. Today, we use it a little more informally. A meme on the internet is a shared or sharable post, usually a combination of images and text. Over the past few years, internet memes have become very popular. It seems that there’s a meme for everything: From the Harlem Shake craze to the ubiquitous popularity of cats in space, motivational posters and de-motivational posters, from Kanye West interrupting things all the way to memes inspired by popular TV shows like The Simpsons, South Park and Game of Thrones. Even the origins of the word “meme” and Dawkins himself have become a meme! What about wine, then? Is there such thing as a wine meme? Of course there is.

What is a wine meme?

Wine is popular, so memes about wine are pretty popular too. Do a quick Google search for “wine meme” and you will get well over 2.5 million hits! Some are visual, some text-based, some designed as greeting cards or postcards, and others based on popular TV shows or celebrities. Wine memes are a quick, easy and fun way for wine lovers to share and communicate with one another. Let’s take a look at some of the most popular wine meme images to try to figure out what is the internet’s favourite wine meme?

FRIDAYS TGIF, right? Friday marks the end of the working week for many people, so understandably it’s associated with fun, relaxation – and wine, too! It makes sense then that wine memes about Friday are so popular. Some of our favourites include: OVERSIZED WINE GLASSES Who doesn’t love a nice wine meme featuring giant wine glasses? It’s OK to drink one glass of wine, right? Sure. And if that glass happens to be the size of a regular bottle or magnum of wine? All the better! WINE AFTER A BAD DAY For some people, a glass of wine after a hard day at work is a natural way to unwind. While we would never advocate excessive drinking, a glass of wine is undoubtedly one way to relax. You will see many wine memes on the subject, usually tongue-in-cheek examples taking the idea to the extreme!

Lots of wine memes depict our favourite TV and movie characters, either drinking wine or supposedly talking about wine.

3 of the best wine meme images on the internet 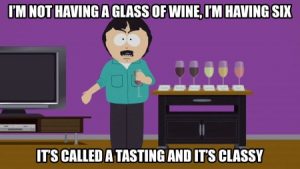 Source: http://thethings.imgix.net/[/caption] South Park's beloved Randy Marsh is the focus of this wine meme, where he is enjoying a wine tasting. This meme doesn't take itself too seriously, and shows the funny side of tasting wine professionally. Randy's argument is that drinking six glasses of wine is classy and proper, and not simply a matter of getting drunk. 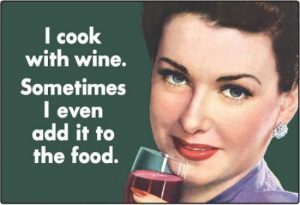 Source: https://www.calaiswine.co.uk[/caption] This wine meme plays on the classic notion of cooking with wine - that is, the wine itself is an ingredient. Instead, the suggestion here is that to "cook with wine" is primarily to drink wine while cooking food. This is a funny wine meme because it subverts our expectations.

Source: http://img.memecdn.com/[/caption] Who doesn’t love a nice wine meme featuring giant wine glasses? It’s OK to drink one glass of wine, right? Sure. And if that glass happens to be the size of a regular bottle or magnum of wine? All the better! Here, the wine glass appears to be even bigger than the lady in the meme!

You might get a kick out of some of these wine memes – or you might not. Internet memes can come in and out of fashion, and wine memes are the same. Something that will never go out of fashion, however, is the humble wine label. The wine label is surely the original wine meme: It transfers the idea and meaning of the wine from one person (usually the winemaker or wine estate) to another (the wine lover). Wine labels can come in all shapes and sizes, look for some of our favourites: